Epitaph to Robert Graves at his home in Deià, Majorca.

Today we celebrate Robert Graves’ 120th birthday – a venerable age indeed. Just 30 years after his death, however, I suspect Graves himself would be the first to say he had achieved little as yet. The Roman poet Catullus said of Gallus, a man he clearly despised:

But now I despair, since the pure kisses of an innocent girl
Have been polluted by your foul saliva.
In truth, though, you’ll not get away with it: For Eternity
Knows who you are – and who you are, Old Lady Fame will tell.

Gallus might have dismissed this a vain and empty threat at the time, but over two thousand year later he only exists to us as a dirty old man. The potential power of literature in this sense has been echoed by many, including Shakespeare in Sonnet 18, though it is of course only a happy few who make it into the canon of Classic Literature.

Graves has made the first steps towards  this eternal recognition, but will he make it any further? While I was reading his excruciatingly introspective autobiography, ‘Goodbye to all that’, this week I was particularly struck by a conversation he reports between himself and a Charterhouse chum a week before the First World War:

“Do you realise,’ Nevill asked me, ‘that we have spent fourteen years of our lives principally at Latin and Greek, not even competently taught, and that we’re now going to start another three years of the same thing?”

The boys Robert and Nevill were at this time products of an educational system which began in Greece as early as the 8th century BC, when Homer and Hesiod reputedly wrote their compositions. Even the Romans in the 2nd and 1st centuries BC were conscious that their language and culture was heavily influenced by this already ancient tradition. The boys were painfully aware of its stifling power, and were justifiably appalled at the prospect of being swallowed up by it. For his career, then, the war was perhaps the best thing that could have happened to Graves at that moment. 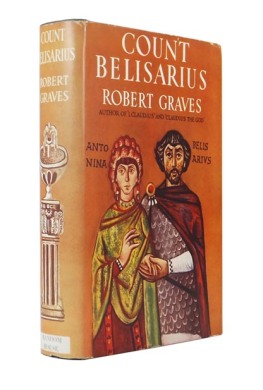 Our First US edition copy of Count Belisarius

After the War the old world was chewed up and spat out by Graves and others, the Bloomsbury Group for instance, and in so doing they became immensely popular. For the first time all this ancient literature, taught verbatim for millennia, could be beaten out of the Victorian aristocratic shape it has taken on and made into candid translations or creative pastiches for the wider reading public. Graves’ best-known work, ‘I, Claudius’, has not become a Classic because it venerates his source, Tacitus, but because it encourages the reader to view such history as just another story, rather than the moral parable it was offered to Graves as. This approach is seen again in another of his novels about the Roman world, ‘Count Belisarius’, which is told entirely from the perspective of Procopius’ satire, ‘The Secret History’, and ignores his more sober historical tome, ‘A History of the Wars.’

The mosaics of the Church of San Vitale, Ravenna, showing the only suspected image of General Belisarius, standing to the right of the Emperor Justinian, centre.

In fact, Graves may claim to have established a monopoly over the way the Classics are studied and portrayed in Western culture today. Such texts are no longer studied for their moral values, but mined for historical information or salacious human interest. Recent TV series and films, ‘Rome’ and ‘Spartacus’ for instance, have been written entirely in the mould of ‘I, Claudius’, sprinkled with historically accurate costumes and sets. Even Ridley Scott’s ‘Gladiator’, which explicitly recognises the Dream of Rome, has it butchered by Russell Crowe. Indeed, most Classics students today can trace their enthusiasm for the subject back to an early encounter with Graves or one of his spin-offs, proclaiming a firmly established self-enforcing cycle of interpretation.

In wider society, many today consider the Classics irrelevant, and very few children encounter them even in translations now, let alone in the original languages. This then is a far cry from the relentless Classical education Graves himself received, and it is in part at least his own doing. By knocking them off their pedestal, along with the moral authority of Christianity, Graves and his contemporaries simultaneously ensured a future interest in the Classics, and killed off their serious study, except from a historical perspective.

In my opinion, if any trace of Greek and Roman literature survives 1000 years from now, it won’t be Tacitus’ Annals being read, but Robert Graves’ novels.